With so much quality recording equipment out there, how can one person ever test it all and make a decision? Dodge the rest and get the best, thanks to our meticulous reviews below. After you snag what you need, apply the tips and tricks in our columns to make the most out of your new gear.

The Best Beginner Guitars For Easy Learning in 2023

Learning to play guitar is a pretty intimidating concept. In most cases, the person thinking about getting into guitars has never really had extended or informed contact with musical instruments before. Which is fine, that's how we all start. Although understanding the basics of a guitar is complicated enough as it is, let alone trying to play with some semblance of skill, the real confusion […]

The Best Compressor Pedals in 2023

If there's any audio effect that's used the most and had the most impact on music, it is by far the compressor effect. It takes the lead so hard that mastering engineers are even going through "The Loudness Wars" over it. It's influence has been monumental. Whether you're a guitarist, vocalist, synthesizer player, or literally anyone else involved in music, you'll be using compression in […]

The Best Dynamic Microphones for Vocals & More in 2023

Our goal here then is to have a quick discussion about the best dynamic microphones (as opposed to condensers) and what else is needed to use them and care for them. It applies to lesser ones as well, though I hope you don't settle for one of those. If you already know you want a dynamic then you may already know some of this preliminary […]

If you've just bought yourself your first electric guitar, you're probably in that state of excitement that's hard to describe. The truth is, that's only the beginning. Now it's time to find yourself a good amp that'll really show you the sounds your brand new six-string is capable of producing. The models listed are by far some of the best you can find. Keep in […]

The Best Fuzz Pedals in 2023 - Get That High-Gain, Girthy, Vintage Distortion

Distortion and overdrive are all fine and dandy, but sometimes you want to really push it to the limit with some ripping fuzz. And by ripping I mean the sound of the woofers in your amp being torn to shreds. In a studio in 1961, Grady Martin played through a faulty preamplifier and that song became a smash hit. Companies scrambled to recreate the sound, […]

The Best Flanger Pedals in 2023 - for that Thick, Other-Worldly, Wooshing Effect

We modern guitarists are lucky. Flanging used to be a nightmare of manipulating reel-to-reel machines, but today it can be achieved in analog or digital fashion all from a small stomp box situated at our feet. This means we can now use it during live performances, too. Most listeners couldn't tell you what the flanger effect is called, but they know it when they hear […]

The Best Studio Subwoofers For Work & Enjoyment in 2023 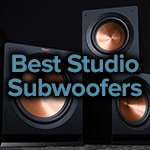 Bass is a huge part of audio for the audience and the studio engineers. They work with the best studio subwoofers in order to produce the tightest, most well-balanced low-end frequencies possible. This way, every time that movie monster destroys another building or the dubstep producer drops the bass, you get the maximum emotional impact. Except when you don't, because you either don't own a […]

The Best Condenser Microphones for Pro & Home Studios in 2023

While nobody outright says that a dynamic mic or ribbon mic can't compete with the best condenser microphone, we all eventually cast our vote with our wallets. Condenser mics are clearly the most popular types - period, whether we're talking about home recording or in a professional studio, or vocals versus instruments. It's hard to go wrong with any of the best of each budget […]

Electrical problems can plague guitar players. The 60 cycle hum and other ground noise issues can be devastating to a performance or recording. Most of the time you can't do anything about bad power at a venue. If a problem develops within your guitar or your other gear while you're live on stage, there's nothing you can do, unless you have a noise gate pedal […]

Everyone has heard vibrato even if they don't realize it. Almost every vocalist uses the effect naturally as they sing, and with the invention of the vibrato pedal guitarists can use it as well. Vibrato is a subtle warbling of pitch by a specific number of semi-tones that hangs around the main note to create a richer and more interesting experience. The ear hears it […]

The Best Mic Stands for Every Budget in 2023

Everyone knows what this contraption is, what it looks like, and what its purpose and function are for a vocalist or recording engineer. However, just as it is with pretty much everything that you can fork over hard-earned money for, a cheap stands pales in comparison to the best mic stands. What's more, because these stands tend to look so similar since it's such an […]

Even though acoustic guitars haven't really changed much in the past century, modern technology did have an impact on these instruments. When the first guitar pickups were invented, it didn't take long before someone tried to find applications for this technology in the world of acoustic guitars. The result we have at the present moment is a market full of acoustic electric models that bring […]

The Best Studio Headphone Amplifiers for Distribution & Sub-Mixes in 2023

Besides, those portable and desktop headphone amps can't provide the features a pro music studio needs in terms of routing and distributing signals, let alone allowing for monitoring sub-mixes. Today we look at the real-deal useful and best studio headphone amplifiers. There are some despicable marketers out there building and selling single-channel headphone amps that cost more than a down payment on a house... zero […]

Most of the effects pedals out there are for universal effects any instrumentalist or studio engineer might use on any number of tracks. But the envelope filter pedal, or auto-wah pedal, is largely designed for the electric guitar, bass, and piano and employed for the funk genre. That's not to say you won't find it elsewhere being used creatively by talented thinkers. It's just that […]

The Best Pitch Shifter Pedals in 2023

If any instrumentalist can get a lot of use out of the pitch shift effect, it's a guitarist. The uses are endless, from harmonizing one's own lead to filling in for a bassist. Combine it with other pedals like a looper and an entire musical universe opens up before you. And how fortunate we are, because in the old days we had to record to […]

Recording technology has come a long way in the past couple of decades. There are major label releases where artists recorded songs on a tour bus or in a hotel closet with the same gear you can have in your home studio for an affordable price. You can also have access to the most advanced gear out there for a far more reasonable cost than […]

The Best Acoustic Guitar for Gentle Weeps & Blazing Solos in 2023

Starting to learn how to play guitar is one of the most exciting, but also most frustrating adventures you will encounter. There's so much stuff you need to pay attention to, techniques to learn, and theory to memorize. However, before you can even get to any of that, you will need to get yourself a guitar. Most experienced guitar players will tell you that an […]

Loopers have come a long way since they first busted on the scene. What started as novelties and practice tools have become unbelievable workstations that can be used to produce full fledged recordings, acting as a multi-track recorder, to helping master instrumentalists build up entire backing tracks over which they improvise and entertain. Although you can find a looper embedded into a microphone or keyboard, […]

There are times when you simply can't get enough gain. Maybe you just need more volume in general or your other pedals or long cables have sucked too much power out of your signal. Or perhaps you want to drive a distortion pedal or a tube amp even harder. This is what the best boost pedal does, and it does it in a clean fashion […]

The Best Octave Pedals to Thicken Your Tone & Enhance Your Effects

The octave effect is exactly what it sounds like it is. You can pitch shift your signal up or down an octave or more at a time so you can use your guitar to play the role of other instruments like a bass guitar, for example. What many don't understand at first is that you can recombine the original signal with the octave-shifted signal to […]