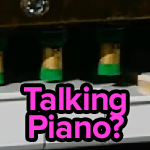 I, for one, welcome our new piano overlords. In 2009 at the World Venice Forum, an Austrian composer named Peter Ablinger unveiled his crazy talking piano contraption.

While everyone was wondering what exactly was about to happen, he had it read the Proclamation of the European Environmental Criminal Court in a human voice:

The video is in German but there are subtitles and the piano speaks in English.

Using MIDI to Program Human Speech From a Piano

This is incredible though. Peter Ablinger took the voice of Miro Markus, a young student from Berlin, as he read this proclamation and managed, with the assistance of his computer, to break it into particular frequencies.

He fed this data back into the computer in MIDI format, essentially, and then had robotic fingers play the sounds out on an actual analog piano. You may be wondering "What is MIDI?" It's digital data about music, but not the music itself.

The reason this works is, by having it all computer fed and operated, the piano can plink out "micro notes" to completely emulate the timbre of the human voice, which is ridiculously complex. Take a look at the photo below for an example of how many and how fast it's firing off these notes.

My question is always whether or not this has any practical applications. I honestly can't see this being more than an exercise in creativity, and ultimately futility once this things gains consciousness.

What it does show you is that anything with finely controlled access to enough static frequencies can mimic a human voice. It also shows us how incredibly complex the human vocal chords are and how amazing it is that we can control them as well as we do.

A quote from Jurassic Park of all places always comes to mind when I see people creating monstrosities like this too:

"Your scientists were so preoccupied with whether or not they could, they didn’t stop to think if they should."

If a man were to ask me if this was the scariest or coolest thing I'd ever seen, the answer would be yes. If a speaking piano asked me, I'd grab the nearest flamethrower and kill it with fire. The only good malevolent A.I. piano is a dead A.I. piano. And that's the unfortunate direction all of this is heading towards.

I mean, yeah, it's cool and all... but can it feel emotion? It can probably beat me in chess (heck, even my Easy Bake Oven can do that while double-time baking me some cookies), but I'm a beast at checkers, so I'm not quite sure it can pass the Turing Test yet.

All it managed to do was get a job on the set of Westworld playing Radiohead in a cowboy bar. I'm not impressed.

We could (and should) launch this thing into space to prove (and get rid of this demonic entity) to the Intergalactic Wizard Federation that humanity has passed the nuclear stage and is ready to attempt to survive the A.I. revolt stage. We won't succumb to the Great Filter. Not like they did with the pre-Ice Age talking pianos.

It's so beautiful... they should have sent a poet. That's right. Both a 2001: Space Odyssey and a Contact reference in a straight row. Can a talking piano do that? No, but the best piano players in the world can.