You are on page 7 of the Columns archive. See the newest posts here.

Mix Position: How to Setup Your Listening Room

How to Get Rid of Sibilance & Plosives in Your Vocals

You're about to learn how to keep those sounds from sneaking into your recording takes and how to deal with the few that still make it in, so save that perfect take! It might still be salvageable by the end of this tutorial… "How come every time I say word that features a 'B' or 'P' syllable, it sounds like I'm hitting a kick drum […]

My brother and I finally set out to making another rap album just for fun between ourselves, and I had always promised myself that I'd become a dubstep maker and make a beat for us to drop some phat rhymes over. It's been at least five years or so since dubstep made a large splash in the states and gained popularity. And it took about […]

The Microphone Proximity Effect: A Great Tool For More Bass

For studio engineers involved in tracking and mixing, the eternal war wages on. We want our final results nice and warm in the low and mid-range of the frequency spectrum, but it's always easy to venture off too far and end up with muddy results that lack clarity and punch. A phrase you'll often hear is "we'll fix it in the mix." No, just no. […]

How to Setup a Home Recording Studio

Go ahead and freak out if you want to, but it's totally unnecessary. This easy guide will have you becoming a studio tech wizard in ten minutes flat. No longer will you look at a piece of gear and experience your brain slowly shutting down under the sheer anxiety of wondering what you're going to break. Learning how to setup a home recording studio at […]

The reason every major studio has these "boxes" hanging on the walls, or the walls themselves are made of cloth covering "something firm but soft," is the same reason why their recordings and mixes come out pristine and beautiful, while amateur works sound like they were recorded in a small closet or a bathroom (most of the time they are!). The reason is that they […]

Audiocoin: The Cryptocurrency of the Digital Music Market

With the advent of the internet, and then easily performed micro-transactions, things have slowly begun to change for artists. It could be said that it all began with crowd-funding, where fans could pre-fund any venture and be promised an array of rewards such as inclusion in the thank you notes, special editions of the product, or even creative input. In our case, die hard fans […]

No matter your goal... whether you're a rapper, producer, singer, podcast creator, video game designer, etc., you need a quality vocal chain set up and ready to rock at home. Recording vocals at home used to be a dream, and now it's a no-brainer. Money is no longer the barrier to entry. The know-how is what gets in the way because you have to know […]

Sampling is funny business, because doing it right is no easy task. This is why producers who want to be purists and not use them at all will turn around and talk smack about a producer who does prefer to and knows how to sample. They're hiding their incompetence. They want you to believe that sampling is an easy shortcut, that it bypasses needing to […]

Life is full of many curiosities, and it is quite curious in itself that this instrument is making a comeback into the mainstream musical consciousness. A lot of people have recently been asking “What instrument is making that sound? It’s a what? How do you spell it? Didn’t that Zelda guy play one of those?” We’re going to explore all of these questions below and […]

When it comes to turning off your listeners, I don't know what's worse: having an anemic, powerless low-end or having a muddy, overpowering mess with no clarity. Unfortunately, these are two of the most common problems with amateur mixes. These two scenarios and could doom the reception of the best song ever written before it even hits the first chorus, so what's it likely to […] 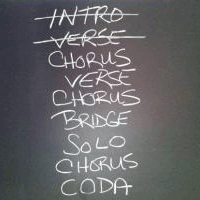 The deeper into the adventure of song writing you delve, the more you'll begin to notice patterns, especially relating to song structure. Differing genres and decades will display their various influences and preferences, but at the end of the day the basic song structure essentials never change. One or two of the fundamentals may disappear in exchange for others here and there, but you'll typically […]

Mixing With Headphones Versus Monitors

While it's indisputable that countless top quality songs have been produced while mixing with headphones, there are many issues to be overcome that can simply be avoided by mixing, or at least referencing, with monitors. Properly balancing the stereo field can be extremely difficult in the full-immersion of earphones versus the natural ambience of an acoustically treated studio with flat frequency monitors. This is largely why you find […]

Why Learn Music Theory? The 4 Core Reasons to Study

The more time you spend in the music industry, the more you'll realize how few "musicians" even know the rudimentary fundamentals of music theory. You'll also pick up on the pattern of excuses, ranging from a load of crap about their free spirit being constrained to not wanting to sound like a jazz cello player when they just want to play roots reggae. All of […]

Your Beats Are Boring and Here's Why

Not a day goes by where I don't hear some non-hip-hop listener say something stupid like, "Listen to this crap. I could make this beat! There's nothing to it. I ought to be a millionaire." If you dig into the online beat making community for even ten minutes you'll realize that a lot of these haters actually attempt to become producers, along with other aspiring […]

With skillful mixing, a horribly recorded song can be made reasonably listenable. A terribly written tune can be polished into a less embarrassing effort. A run-of-the-mill song can be coaxed into greatness by the ears of an experienced mixer. And most importantly, a fantastic song, when refined by the masterful precision of elite mixer, can become a global sensation responsible for launching careers, altering artist's […]