You are on page 5 of the Columns archive. See the newest posts here.

Everyone loves delay. One of the first effects pedals a guitarist goes after is a delay. The first thing a kid does on his family trip to the Grand Canyon is scream "Hello?" and wait for the response to come bounding back. Delays and echoes are not only pleasurable but they're a great way to introduce complexity and a sense of fullness to a keyboard […]

Guitar Strings Guide - All You Need to Know... (And More!)

Every player has said to themselves, “These strings are still ok, ill just keep on picking them…” Next thing you know, your intonation is shot and you break a string while wiping off the accumulation of six months of rust and dead skin cells. "It’s economical and a time saver," I kept telling myself, “I saved a few bucks and got more life out of […]

Miking Your Acoustic Guitar Like a Pro: Placement & Techniques

Acoustic guitar has a variety of voicings, from the instrument itself as well as how it’s played. It can be full-range, evocative, and expressive. Driving rhythms can also explode with surprising power. The softest whispers of delicate strings can frame quiet, emotional vocals. The voice your guitar gives depends on so many factors and each of these impacts how best to capture the particular sound […] 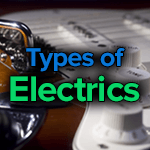 When I was a kid, I had a natural attraction to organized sounds. Music has always been a part of my life, whether my family was singing together at holiday gatherings or my friends where writing their favorite band names on their Trapper Keepers. Music is so pervasive in our day-to-day lives. It's always present, whether through the radio, in commercials, movies and TV, and […] 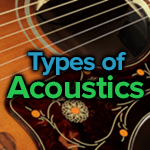 It’s definitely important to buy an instrument that you like the look of, but upon closer inspection, you'll find that the shape of the body effects the tonal properties of the guitar more than you may have previously realized. Let’s take a look at some of the varieties of acoustic guitar bodies, and why a player may choose an instrument based on its sound as […] 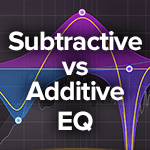 Since you're reading this you're likely familiar with the issue, but for the sake of those fortunate enough to not have dealt with it, let's explain the typical conversation surrounding this topic. It always boils down to some variation of: Cut instead of boost. Attenuate instead of amplify. Never add when you can subtract. People have very strong convictions about this and half of the […]

But all of these knobs and settings are staring back and grinning, daring you to even try to understand what they do. Have no fear. With these 23 EQ tips, you'll have a broad overview of what the knobs do and what must be done for your music to rival the professional mixes. It's nowhere near as scary as it seems on the surface. The […]

Musical Modes Explained: The Music Theory Behind Them

It's easy to run into musical modes and think, "What the heck is going on? Why does all of this need to be so convoluted and complicated?" It does seem that way at first until you work with modes enough to spot the pattern. Then not only does it click into place but you can even work your way through it in your head! The […]

Bass programming is my second favorite part of making beats right after the drums. Laying down the initial, fundamental groove of the song helps the rest of the process move along without any problems. And that needs to be the order of operations: Bass then drums or drums then bass. The problem is most of us are going to have a real hard time dealing […]

The Circle of Fifths Explained

Typical discussion about the Circle of Fifths is largely for beginners and intermediate music theorists, and the tricky part is there's no way to avoid using other technical jargon that a beginner may not know when explaining it. We're going to keep it as simple as possible with explanations of any new terms. So get ready for a wild ride made easy as we work […]

There's nothing better than MIDI programming for getting ideas out of your head quickly and accurately. The faster you can do this without the distractions of tinkering with hardware and software, the better. Staying in the left-brain mode can be the difference between a #1 hit and a dud. When it's time to pump out a beat and the ideas are rolling, the last thing […]

Open Back vs Closed Back Headphones: There's a Clear Winner

There's so much more to the story when it comes to choosing a set of headphones. If you score even a higher tier of consumer level headphones then that's about all you'll need. They'll have a 1/8th inch headphone jack and probably a 1/4 inch adaptor. You can plug them into your smart phone or MP3 player and you're rocking and rolling. But what about […]

Some of these issues are flat out mythology and categorically false, while others are true in some applications and false in other scenarios. No wonder there's a lot of contradiction to be found on message boards and websites. Couple that with people pretending to be more knowledgeable than they are and others simply parroting bad advice and you can quickly see how the confusion continues […]

What is a Headphone Amplifier? Do I Need One?

Even beyond that, many headphones that could benefit from an amplifier can still be used without one at low volumes and you'd never know the difference. But eventually in the professional music industry you run into a headphone amp… Just what is it and why do we need them? Even once a person discovers headphone amps, they usually first encounter the snake oil audiophile type […]

As you continually visit the same room day in and day out and start accumulating years of your life spent in it, you begin to get hyper-sensitive. Little things can become giant distractions. Minor annoyances can cause you to flip out out of frustration. The big things can make you throw your hands up and be ready to quit forever. There are moments when you […]

The difference between solid production and perfect production all boils down to which recording engineer is willing to go the extra mile to take advantage of those last diminishing returns. Most of the time, the temptation is to grab your best mic that's probably already plugged in and on a mic stand, stick it in front of the vocalist, and press record. The reality is […]

Close Miking in Recording: Why, When, & How?

Everyone has heard of this term. It's so common that people who have zero clue what they're talking about will offer up the solution: "Just close mic it!" But what does this really mean? Why was the technique developed? What does it offer over other techniques such as distance miking? How do we use it and when should we use it? There are other microphone […]

Imagine this scenario. You or your band release an EP of six tracks and three of them are awesome. You've printed CD labels and slip covers into those thin jewel cases and started handing them out to friends. One of your friends went the corporate route and ended up playing your music in the car with a wealthy businessman on their lunch break. It just […]

Recording Studio Cables: All You Need to Know

"No, no! Not the Cat-5, bring me the XLR. No, that's the TRS to TS! No, not the optical... Nevermind, I'll get it myself." It's easy to get frustrated and have zero tolerance for audio cable confusion, but that was all of us at one time or another. You have to start at the beginning, but that doesn't mean you can't take the accelerated course […]

Most of us in the recording industry have a solid understanding of how compressors work. We know how to tweak the settings to achieve our goals in a mix. But even the most well-informed of us are hanging on to some misconceptions about the technical aspects of how these crazy machines function. Let's start with the most simple myths and misguidance that's out there and […]